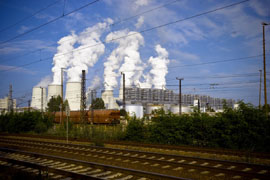 In January 2013 wo sent the following letter to the Swedish Minister for Financial Markets Peter Norman and all Members of the Swedish Parliament:

Distinguished Minister,
Dear Ladies and Gentlemen,
Today, we turn to you in your capacity as the owners of the company Vattenfall.
In our region, the Lausitz, the New Year spirits of many people were dampened due to an uncertain future for their houses and villages. The reason for their anguish is that the Swedish company Vattenfall operates open cast lignite mines and lignite power stations in our region. For operating the latter even more villages will be destroyed and 3,200 people will be resettled. Furthermore, the groundwater level will be lowered and vast areas of valuable landscape will be destroyed.

Politicians of all parties, businessmen, representatives of environmental associations as well as representatives of the church, artists, scientists and citizens of the region have joined in the alliance “Heimat and Zukunft” (“Homeland and Future”) aiming to prevent these plans.

Vattenfall’s communication strategy on lignite is contradictory. While it is announced in Stockholm that investments in renewable energy shall be prioritized from now on, your company advertises the use of brown coal in Germany via big-scale placements in newspapers, as well as billboards. Obviously, Vattenfall tries to influence public opinion and promotes the use of the fossil fuel with the highest CO2-emissions of all. This campaign has been brought forward extensively in the last months. Are the Swedish owners of the company aware of this campaign? How can they admit this striking contradiction?

According to Vattenfall, the relocation of several villages for the planned open cast lignite mine in Jänschwalde-Nord and the massively detrimental effects in the neighborhood would be necessary due to the planned new coal-fired power plant in Jänschwalde. These reasons are laid out in documents submitted to the regional authorities.1 Now, the company states that it does not want to construct new plants for fossil fuels. Nevertheless, it holds onto its plans for new open cast mines. Apparently, Vattenfall aims at keeping all options open while villages and landscape are destroyed as preemption.

We want to remind everybody: There are people living right on top of the coal! Human beings are no strategic raw material reserve. Our communities are no wager for corporate managers. The people living in the Lausitz have a right to their home, their property and a livable environment.

“With the revenues we make from lignite we are going to to promote renewable energies“,Vattenfall announced in a press release. In Proschim, a village that is threatened by the plans for the open cast mine Welzow Süd II, there are already large renewable energy facilities that have been constructed by local agricultural businesses. Photovoltaic cells and biogas plants actually produce more energy than the village needs. Vattenfall plans to eliminate this sustainable energy generation. It plans to invest the profit it will make in renewable energies elsewhere? This is absurd!

The planned opening of the mine, Nochten II, will also destroy a cultural landscape that has developed over centuries. Besides the planned relocations, the effects on the water balance of the whole region would be devastating.

We very much hope that you will stand up for the preservation of our region and advocate for an end to the planning processes for new open cast lignite mines in the Lausitz, and that your company abandons the mentioned projects once and for all!

Please take care that the negative influence Vattenfall exerts on German energy politics and public opinion comes to an end!

We would like to present our concern in a personal meeting and kindly ask you for an opportunity to do so. We wish you a very Happy New Year and all of us a prosperous and peaceful future in our region.