More than 30,000 resettlements are enough! 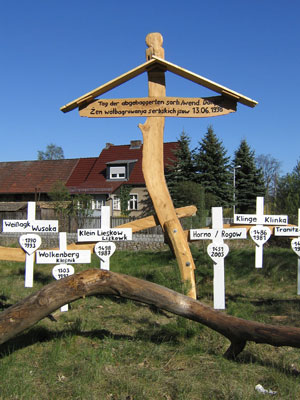 Memorial for destroyed Sorbian villages in Lacoma, which was erected in 1994 and renovated in 2007 and 2015. An official documentation centre was opened in New Horno in 2006.

82 villages and settlements have already been razed to the ground in Lusatia because of lignite mining. It is our duty to end this wholesale destruction as well as to preserve the historic Lusatian landscape and to support the many people who built houses in areas formerly designated for lignite mining, where restrictions were repealed in 1990. Apart from material losses every village resettlement represents an irretrievable human and cultural loss.

More than 30,000 resettlements are enough!